You are here: Home / News / NWS to begin using new warning templates in 2012

The National Weather Service has developed templates for new products that will replace the watches and warnings that have been used for decades. 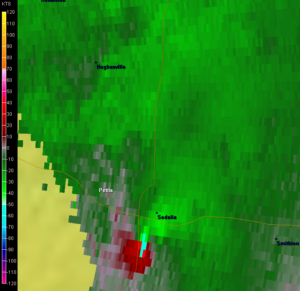 Warning Coordination Meteorologist Andy Bailey with the Kansas City/Pleasant Hill office of NWS says work stepped up to develop those templates in response to the toll taken by severe storms this year.

Bailey says when assessors looked back at the work of the Service, the lead time given to the public and the quality of the warnings issued, “it was a pretty phenomenal performance, and we still had more than 500 people killed by tornadoes this year, and that’s something we take very seriously.”

Bailey says the Weather Service wants to find a way to get information to the public that it will better respond to. “What we’re really trying to do is we’re trying to look at exactly how we’re communicating this information. We’re looking for ways to better communicate it in ways that the public can make use of better. We want to make sure the message is as clear and consistent as possible.”

Teams met in the Midwest over the last couple of months to develop the new templates. “What those templates are really meant to do is make it easier for our media partners to quickly pick out the details and exactly what the impacts are for each individual warning so they can relay that information more concisely, more accurately and quicker to the general public.”

The plan is for those warnings to go into use March 1, in time for the 2012 severe weather season. Bailey explains, “We’ll have a document internally in the National Weather Service…a ‘product description document,’ that basically details the changes that are going to take place and kind of the methodology and the reasoning why we’re doing this. That’ll most likely be released by the end of the year.”

While new warning products may be heard in 2012, Bailey says the effort to create and refine the way NWS gets its message out will likely continue for several years.