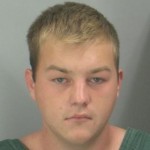 It was just a joke, he says … when Jered Winters pointed his bow and arrow at a friend while they were deer hunting in Jefferson County. But the end result was that Winters fired an arrow that hit his friend in the face and killed him. Winters now has been sentenced to seven years in prison for manslaughter.

Winters was charged with involuntary manslaughter and first-degree assault Sept. 30 for the hunting mishap in Byrnes Mill, about 25 miles southwest of St. Louis.

The boy, 15, was taken to St. Anthony’s Medical Center in south St. Louis County where he died from his wounds that night.