Raymond Harvey, 39, will spend the rest of his life in prison after he pleading guilty to two counts of first-degree murder; two counts of armed criminal action; arson; and statutory rape.

A Henry County judge also handed down 200 years in prison for each count of armed criminal action, seven years for arson, and seven years for the rape of Bickleman’s daughter.  All sentences are to run consecutively, not concurrently. The case was heard in Henry County on a change of venue.
NBC News in Kansas City filed this report at the time of the incident:
Attorney General Chris Koster said Brandee Bickleman had ended a relationship with Harvey ten days prior to the March 9, 2010, murders. 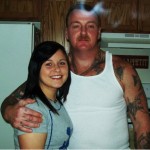 On that date, Harvey went to Bickleman’s residence, bound the victims, and shot them in the head. He then burned the residence in an attempt to cover up the crimes. The autopsy of Bickleman’s daughter, Bailey, revealed that Harvey had sexually assaulted her prior to her murder.
Bailey Bickleman’s Facebook account shows several photos of the three of them together, and in one photo from a holiday album, she refers to Harvey as “Father.”