A former Dent County sheriff’s deputy faces charges in two counties after an incident Saturday night. He is accused of killing his ex-girlfriend and her boyfriend near Salem, leading authorities on high speed chase and engaging law enforcement in a shootout at a crowded Jefferson City Hotel. 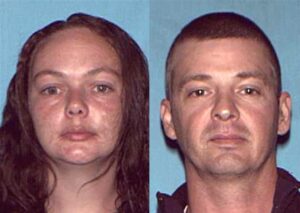 The Jefferson City Medical Group was holding its Christmas party at the hotel. A witness reported hearing what sounded to her like balloons popping, before realizing it was gunfire. Party attendees dove under tables for cover.

One woman in attendance said a family member was helping out by working in the lobby where a backdrop for photos was set up.

“He had just helped a guy put all the instruments away….,” she said in an e-mail, and then spotted him laying against the wall. “I can’t believe [he] sat in that lobby all night by himself — the guy came running through the front door of the lobby. We give God the glory that nobody else there was hurt.”

Rice was shot by an off-duty Cole County Sheriff’s Deputy who was providing security for the party.

The Highway Patrol’s Division of Drug and Crime Control is handling the investigation. Sergeant Paul Reinch says all the agencies involved in the case are cooperating.

He says the scene in Jefferson City could have been much worse.

The Patrol says about 570 people were at the Christmas party; others were in the adjacent restaurant and in the lobby.

Before the hotel shootout

Marvin Rice, 44, of Salem is recovering at University Hospital in Columbia after being wounded in that shootout. He is charged with two counts each of murder, armed criminal action and felony endangering the welfare of a child and one count of burglary in Dent County, and felony assault on a law enforcement officer and armed criminal action in Cole County.Rice admitted to the Highway Patrol that he shot and killed 32-year-old Annette Durham and 39-year-old Steven Strotkamp, both of Salem. Durham’s two children, ages 6 and 2, were in the home at the time of the shooting. Rice then took the 2-year-old, who was his child with Durham, to the home of his wife and left him there.

Rice says the shooting happened during the course of an argument over the custody of the 2-year-old. He also admitted to shooting at police officers in Jefferson City.

The Highway Patrol was contacted about the murders at 6:35 p.m. Saturday.  Later that night a Dent County Sheriff’s Deputy attempted to pull Rice over and Rice fled. The subsequent chase reached speeds over 100 miles per hour before ending at the Capital Plaza Hotel shortly after 9 p.m.

Rice gave his wife a signed, handwritten document saying he wanted the 2-year-old left in her custody. That has been seized as evidence as well as a 40-caliber pistol.