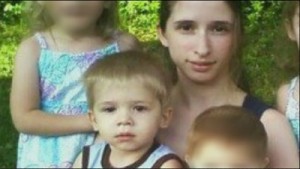 A southwest Missouri man is charged with killing a 4-year-old boy, throwing the body in a lagoon and then sending cell-phone pictures of the dead boy to his mother.

Police say 22-year-old Terry Volner is charged with first-degree murder after calling his mother and telling her he killed Dusty Guenther, whose body was found in a lagoon next to the boy’s home near Hartville. He also said he killed the boy’s mother, her boyfriend and her other children, but they have all been found unharmed. 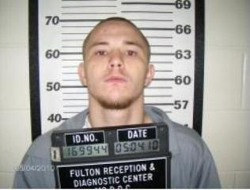 According to the probable cause statement, Volner called his mother, Tina Miller, and said he killed the boy’s mother, her boyfriend, and her four kids. Volner then sent a cellphone picture to Miller of the boy with his throat cut. The little boy’s mother, Gina Guenther, was at work in Lebanon, her two older daughters were at school and a younger one was in a crib at the family’s home. Authorities have taken them into protective custody.

Volner apparently lived at the Guenthers’ home and babysat, but was not Guenther’s boyfriend. He was babysitting the children when the incident occurred.

The probable cause statement says, “Volner sent photos by cellphone to a woman that showed Dusty Guenther’s body in some tall grass with a laceration to his throat and what appears to be a wet stick holding his chin up.” Another picture showed Dusty in the same position and shows an adult’s left arm with a tattoo identical to a tattoo on Volner’s left arm. Two other pictures of what appears to be a small leg in water.

He was at the Guenthers’ home when law enforcement officers arrived … they say that’s when he confessed to killing Dusty. He hasn’t given a reason why.

Volner was treated at a hospital for a stab wound in his stomach and is being held in Wright County on $1 million bond.

If he’s found guilty, first-degree murder is a crime punishable by lethal injection. In addition, he is also charged with armed criminal action and abandonment of a corpse.