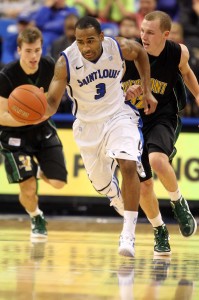 Saint Louis Billikens began the second half with a 13-2 run and cruised to a 62-43 victory over Vermont Wednesday night at Chaifetz Arena. Kwamain Mitchell hit a 3-pointer with 11:40 remaining in the second half that lifted him above the 1,000-point mark for his career, making him the 25th Billiken to reach the milestone. In addition, Saint Louis head coach Rick Majerus recorded his 499th career victory.

Mitchell was one of four Billikens to score 10 points, joining Brian Conklin, Dwayne Evans and Cody Ellis. Evans added a game-high 10 rebounds, including four on the offensive glass, for his first double-double of the season and sixth of his career. Ellis and Conklin added six and five rebounds, respectively, while Kyle Cassity tallied a game-high four assists for SLU (8-1).

Saint Louis cooled to a 37.5-percent shooting clip in the second half, but 60.9 percent accuracy in the first 20 minutes allowed the Billikens to finish the game at 48.9 percent, including 44.4 percent (8-of-18) from 3-point distance. Vermont shot 50 percent in the first half, then slipped to 25 percent after the break to finish at 36.4 percent.

The Bills outrebounded the Catamounts 33-26.