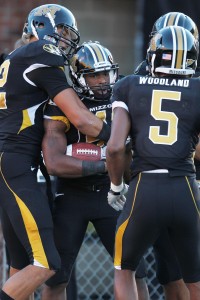 Missouri sophomore tailback Henry Josey earned All-Conference honors for the first time in his career, while senior tight end Michael Egnew was selected as an All-Big 12 First Team member for the second straight season as announced Wednesday morning by the league. Selections were made by the league’s 10 head coaches, who are not permitted to vote for their own players.

Josey led the conference’s best rushing attack in the Big 12 with an average of 8.1 yards per carry. Despite missing the last two games with a season-ending knee injury, Josey finished the year with 116.80 rushing yards per game, best in the conference and 12th-most in the NCAA.

Egnew, a 2010 First Team All-American, finished the regular season with 47 catches for 484 yards and three touchdowns.