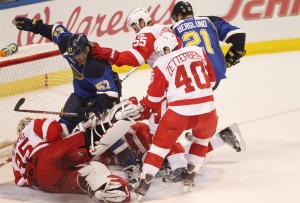 Detroit Red Wings goalie Jimmy Howard hasn’t lost since November 17 and had a goals against average well under two, but the Blues broke out of their power play slump to win 3-2 Tuesday night at home.

The Blues power play was just 8 of 87 this season for 9.2%, (the only NHL team with a percentage in single digits) but got two goals with the man advantage. It’s the first game since last March 30, also against Detroit, where the Blues have scored more than one power play goal in the game.

After a scoreless first period, the Blues fell behind 1-0 in the second and Alex Steen tied the game with his 9th of the year on the power play. David Backes, the Blues captain, put St. Louis on top with his 10th of the year just :42 into the third.

Patrik Berglund scored on a slap shot past Howard less than two minutes later giving the Blues a 3-1 lead. St. Louis goalie Brian Elliot gave up a power play goal, Detroit’s second of the night, with 1:20 to play, but held on for the win.