One of Missouri’s long-standing holiday tradition is the lighting of the tree at the Governor’s Mansion on the first Friday of December. 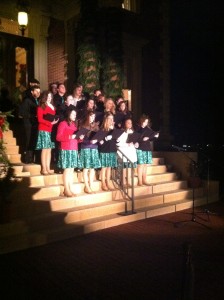 For decades Missouri has been lighting the Governor’s Christmas tree on the first Friday of December according to Governor’s spokesman Scott Holste. He says this particular tradition draws thousands of people to the gates of the mansion to see the decorations once the tree is lit.

There are candle lit tours through the mansion with choirs singing from the grand staircase. Holste says there are two trees at the mansion. They are both white pines from Tannenbaum Farms in Armstrong Missouri. The one outside is about 20 feet tall, the tree inside is about 17.

There were a number of choirs that performed this weekend at the mansion, but the Joplin High School choir was the first to perform at the tree lighting on Friday night. Holste says it’s amazing that the students can come up to Jefferson City to perform, given the struggles they’ve had after the tornado in May.

The choir sang about five songs on the steps of the Governor’s mansion before Nixon flipped the switch to light the tree and the other holiday lights on the mansion. The Joplin choir was one of several choirs to perform Friday night during the candle lit tours of the mansion and the Living Windows celebration in downtown Jefferson City.

Holste says candle lit tours were only this weekend, but the mansion is always open to visitors. The two trees will be up and lit through the holiday season.