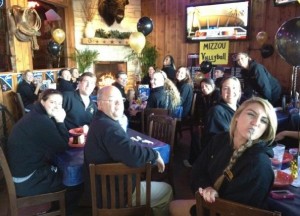 Member of the Mizzou volleyball team ham it up during a recent NCAA watch party. (Mizzou Athletics)

It will be the first battle for a Missouri team against a future SEC rival on Friday when the Tigers face #17 Florida in Cedar Falls, IA. Mizzou will look to create the same magic they had last year on this floor, where two wins in Iowa helped the Tigers advance to the Sweet 16 last year.

The Tigers, a team where the roster is made up of 82% underclassmen, enter the NCAA Tournament as the youngest team in the field. Mizzou is led by Lisa Henning who is the first Tiger ever to lead the Big 12 in kills per set (4.65) and points per set (5.16) in a season. Henning was a unanimous selection to this year’s All-Big 12 First Team. Henning holds the Big 12’s top two kill performances in league play and the top four point totals. Henning is just the third Tiger to eclipse 500 kills in a season and sits just 15 shy of the school record (522).

At the Tigers media day, Henning talked about playing up to the team’s potential. “The Oklahoma match really showed what we are able do. Even though our team’s really young, we can pull together and beat good teams like that. Even though we started out pretty rough, everyone just kind of realized we still had a lot of big games left and we didn’t think about how we had played earlier in the year. We just focused on what was in front of us and keep moving forward.”

Florida comes into Friday’s match as the nation’s No. 17 team in the AVCA Coaches’ Poll and sits at 24-5 and 17-3 in SEC play. Florida finished third in the league as Tennessee claimed the league crown with a 19-1 overall mark.

The Gators boast one of the best offensive attacks in the nation as they are hitting .321 on the season while limiting opponents to just a .160 clip. The key to Florida’s attack is balance as five players average at least 2.00 kills per set, led by Kristy Jaeckel, who averages 3.37 on .287 hitting. In fact, the Gators’ top seven hitters all hit .238 or better while six of those seven are better than .287. Florida also serves the ball very tough, averaging 1.64 service aces per set.