Lt. Gov. Peter Kinder has abandoned his effort to run for governor and will seek a third term as lieutenant governor.  Only one person has ever served three terms in that position, Frank G. Harris, a Democrat who held the office 1933-1945. 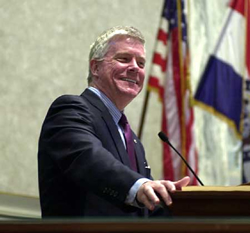 Kinder has not made a public announcement but his campaign office released a statement this afternoon:

“I have worked hard every day to serve all the people of Missouri as their Lt. Governor.  Serving as Lt. Governor is a great honor. I have the experience, track-record and desire to continue working in that capacity every day to achieve needed reforms. Missouri deserves a Lt. Governor committed to reducing government waste, and protecting Missouri taxpayer dollars.”

“Everywhere I traveled during my listening tour people expressed their frustration with Missouri’s unemployment rate and the lack of jobs. Missouri ranked 48th in the nation in job creation in 2010 and had the longest monthly decline in employment in the country under Governor Nixon. Nixon’s leadership has been absent in job creation. Nothing would do more to improve Missouri’s job climate and economic growth potential than defeating Nixon next year. Governor Nixon has failed to lead choosing instead to stand on the sidelines while Governor in other states were taking bold actions and moving their states forward.”

“I believe after numerous conversations with Dave Spence that he is the Republican Party’s best chance of defeating Jay Nixon. Dave is a self-made man and proven manager who understands how to create jobs and improve the state’s economy. He is smart, serious and has a vision he’s shared with me to renew Missouri’s greatness. I am proud to call him a friend and will do everything in my power to see that he’s elected governor next year.”

Kinder began his listening tour during the summer after revelations that he had made visits to a St. Louis-area nightclub and had been friends with a stripper who was a former Penthouse magazine model.