You are here: Home / Sports / Marlins may try to reel in Pujols 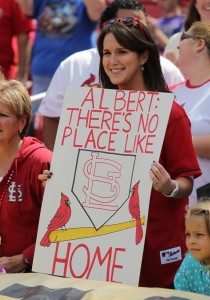 A Cardinal fan sends a message to Albert Pujols during a playoff game in October. UPI/Bill Greenblatt

MLB.com is reporting that Albert Pujols and his agent may be sitting down to the talk with the Florida Marlins as early as Saturday as they try to make the biggest offseason splash with the opening of their new ballpark set for next April, new manager Ozzie Guillen and an increased payroll.

Florida has already talked with St. Charles, MO. native and White Sox lefty Mark Buerhle, who could be reunited with his manager from the southside of Chicago. The Marlins are also intersted in free agent shortstop Jose Reyes.

There is no word yet on if the Cardinals have had any serious talks yet with Pujols. My guess would be they have not. I’m sure Pujols is waiting for other offers to come in to have some leverage for when he begins negotiating with the Cardinals.