It’s typical of Missouri weather to be uncertain and change quickly because we sit right in the middle of two systems. This winter’s outlook poses more of that uncertainty, but can go only one of two ways. If you didn’t like last winter, brace yourself for what climatologists are predicting for this winter. 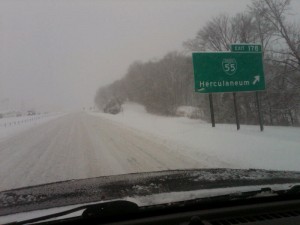 “Its really interesting, it’s similar to what we saw last year, it was a La Nina winter last year,” University of Missouri Extension Pat Guinan says. He says La Nina has different effects on the north than it does on the south. Where Missouri lies means we could get the spill over from either region … or both.

But, Guinan says La Nina isn’t really to blame for last year’s bitter cold and record snow-fall amounts … it’s a different trend from the North — Arctic Oscillation. Much of what winter brings Missouri this year depends on how weather patterns form in the Arctic region, and even though the state has seen two harsh winters in a row, Missourians should brace for a possible third.

Guinan says La Nina has been here for a while, and it’s going nowhere soon. It’s going to stick around through the winter and possibly through next spring.