You are here: Home / Sports / Haley explains his superstitious ways 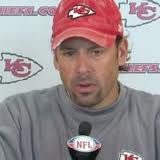 If Todd Haley has it his way, he’ll look like Santa Claus. Just don’t expect him to change his red hat, you know the sweaty-salt stained hat he’s been wearing lately? The hat, along with his beard, is staying as long as the Chiefs are winning.

Haley said he’s always been superstitious, especially when it comes to football, going all the way back to his childhood days when he would go to football games in Pittsburgh with his dad. Now that the Chiefs have a two game win streak heading into their bye week, Haley explains why he’s wearing the hat and growing the beard.  Todd Haley Audio (:52)