The new federal courthouse in Jefferson City has been named for former U.S. Senator Bond. There’s also a Christopher S. Bond Bridge in Hermann, and another one in Kansas City. Bond says he’s not keeping count, that building friendships while working at the federal level for Missouri residents is what has been a blessing.

The Bond Federal Courthouse is situated next to the historic Missouri State Prison in Jefferson City’s “Old Town,” atop the Missouri River and just two blocks from the Governor’s Mansion and the Capitol. Bond says it will be an economic boon for the revitalization efforts of downtown Jefferson City, as well as provide sufficient space and security for judges, jurors, the general public and those being tried.

At a ribbon cutting, he says he can’t take all of the credit for getting it built, and says in addition to his staff, it was the delegates he’s served alongside: Ike Skelton, Claire McCaskill, Roy Blunt and others. 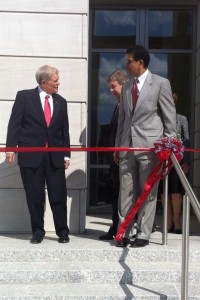 The Christopher S. Bond U.S. Courthouse is the new home of the Western District of Missouri’s Central Division, part of the U.S. Court’s Eighth Circuit.

The $68 million building is designed to stand for at least 100 years.