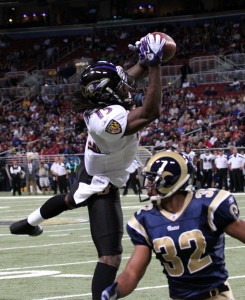 Baltimore Ravens quarterback Joe Flacco connected for three touchdowns in the first quarter with Torrey Smith as the Ravens pounded the Rams 37-7, dropping them to 0-3. Flacco threw for 389 yards.

Baltimore gained 554 yards to the Rams 244. In addition to Flacco’s big day, the Ravens ran the ball 26 times for 168 yards. Flacco and Smith connected for a 74 yard touchdown on their second offensive play of the game. Then another time for 41 yards late in the first quarter. After a three and out by the Rams, the two connected again three plays later for 18 yards.

Sam Bradford was 16 of 32 for 166 with a TD and INT. Steven Jackson saw limited action carrying just four times for 23 yards.

Previous Post: « How to get Cardinals’ postseason and tiebreaker tickets
Next Post: Chiefs come up short in San Diego »