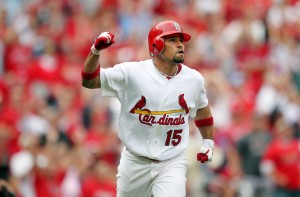 Yadier Molina’s solo home run in the seventh and Rafael Furcal’s solo homer in the eighth off Randy Wells tied and then gave the Cardinals the lead and a 3-2 win over the Cubs. With Atlanta’s 3-0 loss to Washington, the Cardinals trail by just one game in the wild card.

The Cubs took a 2-1 lead in the top of the seventh on Starlin Castro’s RBI single with two outs off starter Edwin Jackson, after Marlon Byrd led off the inning with a double. Jackson got a no-decision, but helped score the Cardinals only run with his sac fly in the fifth with the bases loaded.

Octavio Dotel got the win and Jason Motte picked up the save.

Previous Post: « Mizzou can’t keep up with Oklahoma
Next Post: How to get Cardinals’ postseason and tiebreaker tickets »