You are here: Home / Sports / Cardinals sign Berkman to a one year extension 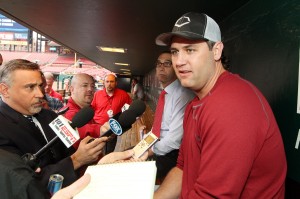 St. Louis Cardinals right fielder Lance Berkman talks with reporters after word was released that Berkman has inked a one year deal to stay with the club for the 2012 season. UPI/Bill Greenblatt

The Cardinals and right fielder Lance Berkman have agreed to a one year contract extension. The 35 year old has helped lead the charge this season by being amongst the league leaders in several categories including home runs (31), slugging percentage (.555), on-base percentage (.412) and batting average (.300), while playing a solid outfield.

I think this also bodes well to improve the team’s chances of signing Albert Pujols. While Pujols said he would offer no home town discounts, he has said he wants to finish his career in St. Louis and wants to see the organization continue to sign players that helps give them a chance at a championship.

With the signing recently of Chris Carpenter, now Berkman and plans to pick up the option on Adam Wainwright, that sends a strong signal to Pujols.