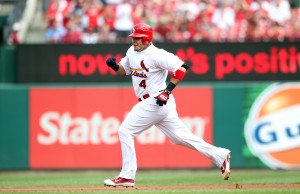 Yadier Molina had three hits, including a three-run double in a five-run third inning, and the Cardinals are back in the playoff picture by completing a three-game sweep of the slumping Atlanta Braves with a 6-3 win Sunday.

Jake Westbrook (12-8) allowed two runs and five hits in 5 1/3 innings for the Cardinals. Jason Motte pitched a scoreless ninth for his fifth save in eight chances.

The Cardinals pulled within 4 1/2 games of NL wild card-leading Atlanta. They have 16 games left and open a three game series in Pittsburgh on Monday. The Braves start a three-game series with the Marlins on Monday and have 15 games remaining.

Previous Post: « Injuries pile up on Rams in loss to Philly
Next Post: Mizzou dropped out of the top 25 »