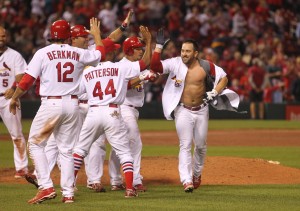 Down to their last out in the bottom of the ninth inning, the Cardinals loaded the bases and Albert Pujols tied the game with a two run single. Then Nick Punto’s 10th inning sac fly gave the Cardinals a 4-3 win over the Atlanta Braves.

Punto’s heroics were set up by a couple of base hits, a sac bunt and an intentional walk for Punto, who worked a 3-2 count before hitting a drive to center field that ended the game.

The Cardinals get to 6.5 games behind the Braves in the National League Wild Card race with 18 games remaining. They’re also 7.5 games behind Milwaukee in the NL Central. The Cards are done with their season series against the Brewers, but have two more meetings with Atlanta this weekend.