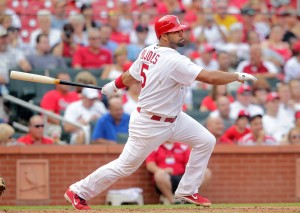 Cardinals left hander Jaime Garcia, working on nine days’ rest, earned his first win since July 23 and drove in the go-ahead run to lead the St. Louis Cardinals to a 6-4 victory over the Cincinnati Reds on Saturday.

Garcia (11-7) allowed just two runs, one earned and seven hits over six innings while striking out six and walking one.

Prior to Saturday, Garcia gave up seven earned runs in his previous outing, a 9-4 loss to the Dodgers on Aug. 24. Tony LaRussa then skipped Garcia’s turn in the rotation on the trip up to Milwaukee, as he has thrown a career-high 170 innings this season.

Albert Pujols paced the Cardinals’ 10-hit attack with a 2-for-3 performance. The three-time NL MVP is 8 for 11 in his last three games, pushing his average to a season-high .296.

Jason Motte got five outs for his second save. He has not allowed an earned run in his last 21 appearances.