Soldiers of the Missouri National Guard’s 1035th Maintenance Support Company used their annual Family Day picnic to pay tribute to a fellow soldier killed earlier this year, according to a report filed by the Guard. 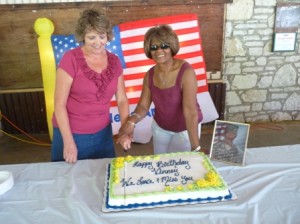 Spc. Vincent Valiant was shot to death outside of his Ferguson apartment on the night of Feb. 13 in what police said was a robbery attempt. An 18-year-old Alton, Ill., woman has since been charged with his murder.

Known to his friends and family as “Vinney,” Valiant had a reputation as an excellent cook, first with the 735th Field Service Company in De Soto, then with the 1035th, based at Jefferson Barracks in south St. Louis County. He had been in the National Guard for three and a half years. 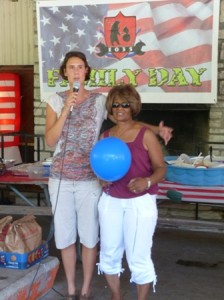 As Aug. 14 would have Valiant’s 34th birthday, friends, family members and fellow soldiers gathered at Sylvan Springs Park on Sunday to cut a cake in his honor and release balloons in his memory.

“The support I’ve received from Vinney’s unit has been excellent,” said his mother, Annette Valiant, of Florissant. “The commanding officer and others are always there to help.”

Despite her son’s passing, Annette has remained a member of the 1035th Family Support Group, an organization that works to support military families in times of need.

“I stayed with the organization because Vinney was so committed to and passionate about the unit and what the Guard stands for,” she said. “My involvement keeps his memory alive and it makes me feel good knowing that Vinney’s fellow soldiers have not forgotten him.”

“It is incredible that Spc. Valiant’s family continues to be a part of our unit even with his passing,” added 1st Lt. Dorothy Mulder, the company commander. “Having his family members here makes this day very special.”

Mulder praised the work of Annette and other Family Readiness volunteers, who she credited with organizing the unit picnic.

The National Guard contributed to this report.

Previous Post: « River levels crop as Corps reduces releases
Next Post: Back to school, cell phone or no »