You are here: Home / News / Northwest’s Soy excels as a leader both on and off the field 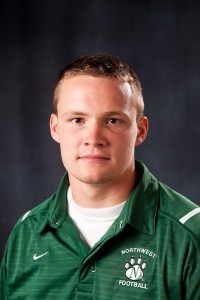 On the football field, as a wide receiver for Northwest Missouri State University’s Bearcat football team, Jake Soy has proven himself as a team player and a leader, but his passion for giving back to others in the Maryville community and beyond is making an impact, too.

Soy, of Durant, Iowa, was recognized last month for his selfless contributions to volunteerism and community service as a nominee for the 2011 Allstate AFCA Good Works Team. In June, he also became the fifth Bearcat in the last 10 years to receive the Ken B. Jones Award.

Recently, Soy fulfilled a longtime goal by traveling to Haiti with other members of the Northwest community and Maryville’s Countryside Christian Church. Soy raised money on his own to fund the trip.

“I’ve always had a passion for helping people, and it’s been on my bucket list to go on a mission trip at some point in my life,” Soy said. “When the opportunity presented itself, I jumped on it. I figured that if I couldn’t find time now I never would, so I booked a ticket and decided I would make time.” 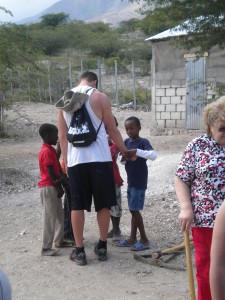 The non-profit organization is dedicated to providing food, shelter, clothing and education to the children of Haiti. Since opening its first orphanage with 16 children, House of Hope has opened a second orphanage.

During the trip, Soy and the other volunteers played football and soccer with 60 children at two different orphanages. Forty-two of those kids lost their parents to last year’s earthquake.

The volunteers also cleared a swath of dry land, established an irrigation system and planted a series of gardens to produce food for residents. The group hiked up a mountain to deliver fruit trees and seed packets to villagers, and they helped rebuild a road destroyed by the earthquake.

The experience proved eye-opening for Soy.

“The overall goal is to make them more self-reliant on themselves and better their culture,” he said. “There’s kids there who have to hike four hours because they live on top of a mountain. They hike down that an hour and a half and climb up it every day for school, and they don’t think anything of it. I personally didn’t believe it until I saw a little girl going up it after school.”

Soy added, “They just aren’t given the same opportunities. If they make it out of that system with an education, they’re better off than three-fourths of the country.”

The Ken B. Jones Award, presented annually by the MIAA to a male and female student-athlete, recognizes athletic and academic accomplishments as well as campus and community service. The Allstate AFCA Good Works Team recognizes off-the-field character and leadership for college football players and is considered the sport’s pre-eminent community service award.

In Maryville, Soy volunteers his time to read to students at local elementary schools as well as residents of nursing homes. He also has served as a youth summer camp counselor at Northwest’s summer football camp each of his four summers in Maryville, and he participates annually in the Bearcat football team’s community clean-up. Soy is active in Northwest’s chapter of the Fellowship of Christian Athletes.

Soy said the importance of volunteering and community service was instilled in him at an early age.

“My interest in community service stems from the way my parents raised me,” he said. “They made it important in their lives, and I just learned along the way how far a little help can go. In my own life I have been very blessed, and community service provides a way to give back.”

Soy, who this summer completed his bachelor’s degree in business management and marketing, is heading into his senior season on the Northwest football team. As a member of the 2010 squad,

For this news release and more information about Northwest Missouri State University visit our Media Center at http://www.nwmissouri.edu/media/.