Republican leaders announced they are asking for a special session of the legislature to discuss several issues they were unable to come to an agreement on during regular session. Senate President Pro Tem Rob Mayer says leadership will meet with the Governor early next week to discuss the omnibus jobs bill they’ve crafted for consideration during that session. 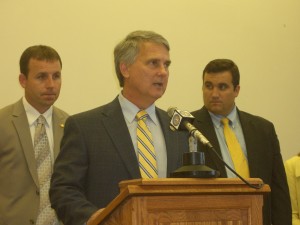 Mayer says he thinks the special session will be held the week before the veto session, which is in September. Mayer says House and Senate Republican leadership have compromised on tax credits and other issues to come up with a bill he says is too important to not consider in a special session. He says there’s still a possibility lawmakers will have a vote on the early site permit for Amaren if a deal can be reached before September.

House majority leader John Diehl says the major differences were in tax credits. House speaker Steven Tilley says it includes the China Hub and some provisions for data storage centers. He says he expects leadership will meet with Governor Nixon early next week.