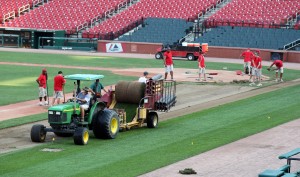 Busch Stadium ground crews begin pulling up the playing field in St. Louis on July 10, 2011 as preperations are being made for the U2 concert on July 17. The field will be repleaced with new sod for the St. Louis Cardinals to play on when they return home on July 25. UPI/Bill Greenblatt

By the time that U2 comes to the microphone on the world’s largest stage Sunday night at Busch Stadium, the concert will likely have set a St. Louis concert attendance record with over 52,000 expected.

“Sunday night will be truly special and unlike any concert you have ever attended,” said Vicki Bryant, Vice-President of Event Services & Merchandising for the St. Louis Cardinals. “We want to make sure that those attending the concert are mindful of several details to ensure their enjoyment of this historic event.”

U2 fans with general admission field tickets will be allowed to start lining up along Clark Street in front of Gate 5 at 7:00AM on Sunday morning. Stadium Gates will open at 5:00PM. There will be no overnight camping allowed. Open fire, glass or alcohol in line will not be permitted. Concessions will be available outside the ballpark for those fans lining up for entrance. Fans are advised that no blankets are allowed on the field. Proper footwear is advised as the field will be hot.