You are here: Home / News / Cell phones blamed for 6 percent of fatal crashes in Missouri

The Highway Patrol reports a 7 percent decrease in fatalities in the past year, and a 35 percent decrease over the past five. Lieutenant John Hotz says the causes though remain steady. For fatal accidents, speed is the number one cause. For accidents with injuries, it’s inattention. 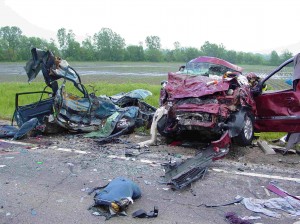 “We say inattention and a lot of people automatically assume ‘Well, they must must be texting or talking on their cell phone,'” he says. “Those are certainly part of it, we have a lot of other things that contribute to inattention, such as adjusting the radio, talking to other passengers in the car, reading a map, reaching for various objects … all of those things are directly related to inattention.”

In 2009 (the most recent year with complete numbers), there were 878 fatalities — about 6 percent of them were attributed to cell phone usage. Of the 146 fatal crashes attributed to inattention while driving — only 9 of them were because people were texting or talking on the phone. In accidentes with injuries, about 5 percent were blamed on cell phones, or, 10,669 of the 53,829 total.

Hotz says the patrol doesn’t take a stance on whether talking or texting should be illegal. In Missouri, it is illegal for drivers 21 and under to text while driving. The legislature has proposed making it illegal for all drivers, but the measure has failed the past two legislative sessions. Missouri has not proposed or passed any restrictions on talking on the phone while driving, though some other states have.

Hotz says some states have implemented hands-free only laws, but he thinks that gives people an inaccurate perception on the safety of talking hands-free. He says talking on the phone isn’t a physical impairment, but a mental one. It’s when a person gets so focused on their conversation that they are no longer paying attention to their driving or their surroundings, he says, which is why inattention can be defined anything that shifts that focus.

He credits the steady decline in crashes and deaths not to policy, but to increased enforcement and education, as well as improvements to Missouri roads and bridges. The Highway Patrol works with the Missouri Department of Transportation and other organizations to promote awareness regarding seat-belt use, driver inattention, slowing down in work zones, and drinking and driving. Driving under the influence is the No. 3 contributing factor to all traffic crashes in Missouri.

Traffic deaths in Missouri are at their lowest since 1950.