You are here: Home / Sports / Holliday and Berkman power Cardinals past the Reds 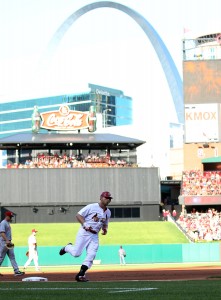 The Cardinals beat the Reds 8-1 and activated Albert Pujols off the disabled list, but there was no need to put him in the lineup.

Matt Holliday, who found out he will participate in the Home Run Derby at the All Star game next week hit two homers. He and Lance Berkman went back to back in the first inning. Holliday hit a three run shot in the fifth as well. Berkman hit his 350th career home run, the longest in Busch Stadium history…452 feet. That homer ties him for fourth with Chili Davis for home runs by a switch hitter.

The Cardinals have opened up a four game lead on Cincinnati, two on Milwaukee who lost to Arizona and maintained a 1.5 game lead over Pittsburgh who beat Houston.