Frog season in Missouri kicks off at sunset. Conservation officials say part of the appeal of frogging is its simplicity, but Water Patrol officials are urging enthusiasts to be safe while having fun. 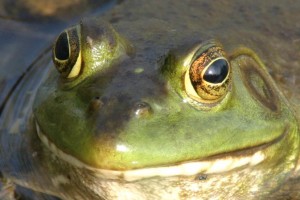 Water Patrol spokesman Lieutenent Jerry Callahan says froggers are going to be around and on the water after dark, looking for their game. And he says while smaller ponds, lakes, rivers and streams are unaffected by flooding, larger rivers and bodies of water can be dangerous.

Frog season runs tonight through October 31st. Authorities say shooting bullfrogs and green frogs is legal, but that bullets can recochet off the water. They say gigging and grabbing are the safest and most preferred methods.

The Conservation Department says one of the reasons frogging is so popular is because almost anyone can do it. Unless, that is, you can think of another outdoor sport where hunters pursue their quarry after dark using nothing but a flashlight and their bare hands or a forked gig.

Guns, gigs, atl-atls and other means of frogging are allowed, but authorities remind those shooting at frogs that bullets can ricochet on the water and go in any direction.

It’s classified as both a hunting and a fishing season, depending on the method you use. The bag limit is eight bullfrogs or green frogs; the possession limit is 16.

After tonight, you don’t have to wait until after dark to go frogging, but that’s when the majority of froggers go to work because that’s when bullfrogs are most active.

According to the Conservation Department, here are the basics: “You wait until dark, when walk or wade along the bank of the nearest pond or stream searching for frogs. When you see one, shine a light directly in its eyes. This temporarily blinds the frog and allows you to grab it with your hands or gig it and stash it in the sack you’ve brought along. Your prize is the meaty legs of these large amphibians. Size will vary, but some of the larger frogs can have legs measuring up to 10 inches in length.”