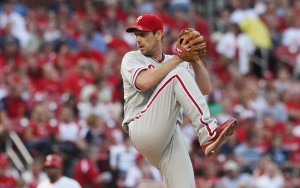 Cliff Lee scattered six hits and the Philadelphia Phillies got homers from Jimmy Rollins and Ryan Howard in the fourth inning of a 4-0 victory Wednesday night at Busch Stadium. Lee has lost just once since May 16th when the Cardinals beat him 3-1 in St. Louis.

The Cardinals got another good outing from Kyle Lohse. He fell to 7-4, but went eight innings matching a season best, allowing three runs and seven hits with no walks or strikeouts. He struggles came in the fourth when Jimmy Rollins led off with his seventh homer and former Missouri State Bear Ryan Howard hit a two-run blast, after a single by Chase Utley.

Life without Albert? Two runs and 11 hits in the first two games and Lance Berkman and Matt Holliday are a combined 2 for 16.