You are here: Home / Sports / Chiefs defensive backs a part of offensive ad 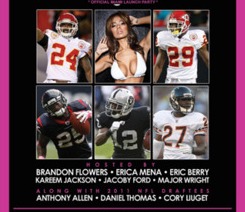 An ad for the Exxxotica Expo 2011 shows Chiefs defensive backs Brandon Flowers and Eric Berry in their uniforms and lists them as hosts for the event. An NFL legal team is looking into the matter and is concerned about protecting the league’s intellectual property rights. No comment from the Chiefs or the players yet.

Click here to see the full ad the players are featured it.