A list of missing people in the Joplin area — that was initially more than 1,3oo — was pared down to 232 and today is at 156. Governor Nixon says some of them were found to be deceased, others have been located and are alive. The death toll now stands at 132. 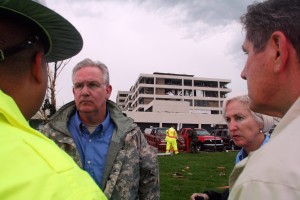 Nixon says identifying some of the victims is difficult because of the brutality of the storm. Of the 132 victims in the morgue, some 50 or 60 remain unidentified. Newton County Coroner Mark Bridges says a few misidentifications from the start led them to restrict family members from viewing bodies.

When asked how this catastrophe has affected him, and his wife, personally, Nixon grasped for words.

“You cant explain it, you know, it’s … for whatever reason, Joplin, Missouri was chosen to suffer the largest single loss of life and property in a tornado at least in modern reported history,” he said, giving pause. “We’ll be strong, we’ll recover. And there will be good days, many good days as we help to rebuild. But there’s a profound sadness to be gov of state in which thousands of people … don’t have homes, they’re gone. Hundreds of people are injured, well into the hundreds are deceased.”

AUDIO: Nixon expresses his sadness over the losses [Mp3, 4:44 min.]

Nixon wants to assure Missourians … especially in those areas devastated by natural disasters … that he is making sure there is money to rebuild. He has also signed several executive orders to expedite recovery in Joplin, including placing the Missouri National Guard as the lead agency for debris removal. He is also working with the Army Corps of Engineers and the Department of Natural Resources to make sure repair and rebuilding is done quickly and effectively. Getting schools rebuilt is a priority.

Nixon has declared this Sunday, one week after the tornado struck, as an official state day of prayer and remembrance. President Obama will attend a memorial service for the victims Sunday. Nixon and Obama will be joined by local clergy, with music, scripture and prayer.

A strong showing of local, state and federal officials is expected, and a large section of the auditorium will be set aside for local clergy. The public is invited and encouraged to attend.