Amid the ruins in Joplin, questions about the future surface. 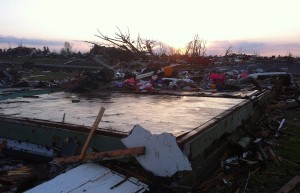 Much of Joplin looks like a war zone; piles of rubble where homes and buildings used to be, cars, even a helicopter, overturned, some vehicles sitting on top of each other. Shredded stumps where shade trees once stood.

The Federal Emergency Manage Agency’s Rich Serino says Joplin will recover; how long that will take, he doesn’t know.

“I don’t want to necessarily put a time frame, we’re very early on in this, but having been to other communities, having been to Greensburg, Kansas that was literally devastated by a tornado, not to this magnitude, but the entire town gone. They rebuilt that entire community. The town people came back,” Serino tells reporters. “And, talking to people here, they’re going to rebuild this community and they’re looking forward to rebuilding this community and being proud of it.”

An EF-5 tornado struck Greensburg in 2007, wiping out the small community in western Kansas.

Joplin City Manager Mark Rohr says city officials have looked ahead and the city planning department is working on that; how best to work with residents on rebuilding.

“We do have an eye on the future and realize that there are other things to come and we’re working on that,” Rohr told a news conference.

But, Rohr emphasizes, for now the city will concentrate on searching for survivors of the deadly tornado.