Some 265 citizen soldiers with the Missouri National Guard are at ground zero in Joplin, hoping to find survivors. 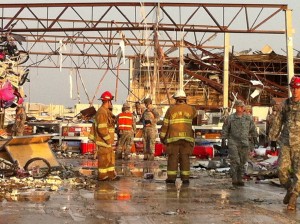 Sgt. Nathan Wilson and his fellow guardsmen are searching for survivors in Joplin … a tedious process. Wilson says it really is “looking piece by piece.”

As for how they mentally prepare to look for, and find, the worst, Wilson says they make it personal. Many of them have wives and children, he says, and so they can imagine if they were looking for their loved ones, and treat the task at hand as such.

Along with jaws of life, rapelling equipment and other specialized extraction equipment, Wilson says there’s a basic item that’s the the utmost importance… gloves. He says they’re burning through gloves because moving concrete and siding is tearing right through them, tearing up their clothes.

It’s a slow process as rescuers peel back the mountains of debris layer by layer, but they’re hoping for the best. So far one survivor and three dead have been pulled from the flattened Home Depot; seven survivors have been pulled from a nursing home, all with minor injuries … no official count on how many are still missing. A total of 17 people trapped in debris have been found alive.

The Death toll in Southwest Missouri is now 116 after an EF-4 tornado flattened parts of Joplin. More than 1,150 people have been treated for injuries at hopitals all arround Joplin and as far away as Tulsa, Oklahoma.