Governor Nixon says the state response to the deadly tornado that has devastated Joplin began last night and continues today as the search for survivors proceeds. 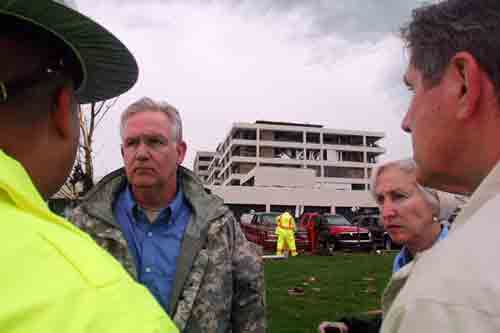 “We’ve got about 500 firefighters from around Missouri down here now searching the rubble with shelters open. And with the hospital hit, we had to move a number of patients out of there,” Nixon tells the Missourinet. “The bottom line is that it’s a very challenging situation in this weather, but we’re still actively working to search to find folks that have survived.”

The official death toll stands at 89, but city officials fear that will rise, perhaps considerably. More than one thousand Joplin residents sought treatment for injuries, from minor to serious. Rescue crews freed five families from rubble this morning.

A huge tornado cut about a half-mile swath of destruction for six miles through the southern part of Joplin. It struck St. John’s Regional Medical Center. Patients had to be moved to Freeman Hospital West as well as a hastily constructed medical center in Joplin’s Memorial Hall. The damage to one hospital and the increased workload on the other forced those injured in the tornado to seek treatment in surrounding communities, including Neosho, Lamar, Monett, Carthage and Springfield as well as Pittsburg, Kansas and Miami, Oklahoma.

The White House reports that President Obama took time from his visit to Ireland to call Nixon this morning at about seven o’clock.

“The President called Missouri Governor Jay Nixon to personally extend his condolences and to express that all of the families of Joplin affected by the severe tornadoes are in his thoughts and prayers. The President assured the governor that FEMA will remain in close contact and coordination with state and local officials.”

“The President has directed FEMA Administrator Craig Fugate to travel to Missouri to ensure the state has all the support it needs. In addition, in anticipation of requests for assistance, a FEMA Incident Management Assistance Team (IMAT) is en route to Joplin. This self-sustaining team will work with FEMA officials already in Missouri to coordinate with state and local officials to identify needs and any shortfalls impacting disaster response and recovery.”

“The Federal government will continue to support our fellow Americans during this difficult time.”

The Federal Emergency Management Agency has extended disaster assistance to Jasper and Newton counties. The declaration makes affected individuals eligible for federal assistance to cover uninsured losses or expense, which can include housing, home repair or the replacement of items.

Missourians can contact FEMA directly at 1-800-621-3362. They may apply for disaster assistance online at http://www.disasterassistance.gov/.

The declaration also allows communities to apply for federal funds to offset the cost of emergency protection and debris removal. The state has made information available at MO.gov.

The United Way of Greater St. Louis states that it will coordinate volunteer response to Joplin and is only requesting help at present from medical personnel. Officials at the United Way say they will wait to send volunteers to aid in recovery until search and rescue efforts have been completed, which took take up to seven days. United Way staff is taking names and contact information from those who want to help, but asks that volunteers wait a few days before offering help.

Medical personnel, or those with heavy equipment and chainsaw skills, are urged to respond immediately at https://www.showmeresponse.org/. All others asked to wait three to five days to sign up by calling 800-427-4626 or 211.

The Missouri Food Bank Association has been working with SEMA and is asking those wanting to donate food to coordinate through their local food bank for food and supply donations; visit http://www.feedingmissouri.org/ to find your local food bank.

Those wishing assistance or information from the American Red Cross should dial 417-659-5464.

Jessica Machetta contributed to this report.