Reports that Ameren Missouri is no longer backing the nuclear permit compromise are misleading, the utility company says. 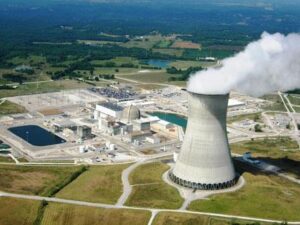 House and Senate backers of a bill that would let Ameren charge ratepayers for an early site permit for Callaway Two want more time to vote on that bill, even though time ran out on it during the regular legislative session. Ameren and other utility partners still want that to happen, too. Legislators and utilities are hoping Governor Nixon will issue a callback to the legislature to take the measure up in special session. Nixon has not indicated whether he will do that.

“In the final hours, and frankly minutes, a bill was taken to the senate floor … it was 48 pages long and only about four or five pages of that bill were the site permit,” Wood said. “And we had some concerns with a few different pieces of the bill, and some of them were the same concerns that the senators brought up when it was debated on the floor.”

Wood says now that the legislative session is over, Ameren’s suggestion is that “everyone take a deep breath, and let’s step back and take a look at that bill and give a lot of the different pieces of that bill and give it some consideration.”

He says obviously legislators need an opprotunity to take a more thoughtful review of the different pieces of that bill as well.

The 40-some pages of bill that concern Ameren Missouri, its utility partners and legislators contain language that would charge ratepayers for renewable energy projects — up to $900 million — and carve out discounts for industrial customers.

As to whether that language was added to abate opposition from Monsanto, Ford Motor Co., Noranda Aluminum and Anheuser-Bush, Wood said he couldn’t comment. Those four companies, as well as the Missouri Retailers Association, were key in effectively blocking the legislation with strong lobbies against it.

Another sticking point is funding for the Office of Public Counsel, which represents ratepayers before the Public Service Commission. As the legislation has morphed, it has taken on more or less funding for that office.

Senator Mike Kehoe (R-Jefferson City) has written a letter to Nixon asking for a callback to take up the issue, saying time is of the essence in getting consensus on this measure and getting it passed. Wood is pleased with Kehoe’s leadership, he says, and agrees that there is some immediacy to get a plan in place for addition nuclear energy in Missouri.

“We do take some risk,” he says. “The different alliance partners have different timeframes for when they need generation. A number of neighboring states have passed legislation or have legislation in support of nuclear power, and there are alliance partners who have talked to potential constructors of nuclear power, either large units or smaller technology units, in other states.”

The Fair Energy Rate Action Fund, which opposes the legislation, issued a statement saying that “Ameren and their coalition have, for the entire legislative session, promoted legislation to allow them to bill ratepayers for the cost of their early site permit. Their initial proposals would have raised rates on customers over $100 million, and the compromise they agreed to the last day of session would have allowed them to raise rates by $45 million.”

“Ameren didn’t all of a sudden find out the last day of session that they wanted to increase rates on customers – that was the purpose of the legislation they introduced” Director Chris Roepe says.

The group, which represents several consumer groups, says it remains committed to passing the agreement that was reached on the last day of session. Other members of the group are AARP, Anheuser-Busch, Consumers Council of Missouri, Ford Motor Company, Missouri Association for Social Welfare, Missouri Retailers Association and Noranda Aluminum.