You are here: Home / Sports / Cardinals fall short to Florida in the ninth 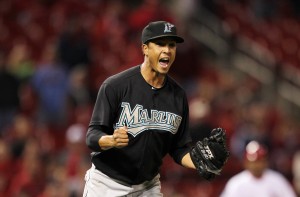 Florida Marlins pitcher Leo Nunez celebrates a double play and a 8-7 win over the St. Louis Cardinals at Busch Stadium in St. Louis on May 4, 2011. UPI/Bill Greenblatt

Mike Stanton hit a tiebreaking two-run homer in the ninth inning, his third homer in four games, giving the Florida Marlins an 8-7 victory Wednesday. He beat rookie Eduardo Sanchez on a 1-0 fastball. The Cardinals rallied with one run in the ninth, but came up short when their hottest hitter grounded into a double play.

Former Royal Leo Nunez gave up Jon Jay’s second pinch-hit homer of the season in the ninth but got Matt Holliday to ground into a game-ending double play for his 11th save in 11 chances. Holliday had two hits and an RBI and leads the NL with a .413 average.

Mike Dunn was the winner for Florida has he recorded six straight outs in the seventh and eighth for the Marlins, who are off to the best start at 19-10 in franchise history. Albert Pujols is now 0-for-4 with the bases loaded this season after grounding into a force play against Brian Sanches with the game tied in the sixth inning. That cost Chris Carpenter a chance for a victory. Carp is coming off his first winless month when healthy in six seasons with St. Louis. This wasn’t one of his best efforts. Carpenter went six innings and gave up six runs, four earned, and 10 hits. A 16-game winner last year, he’s 0-2 with five high quality starts in seven outings.