You are here: Home / Sports / Berkman powers Cardinals past Marlins 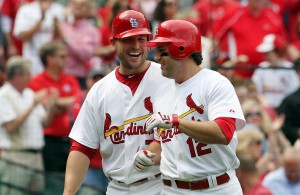 St. Louis Cardinals Matt Holliday (L) laughs with Lance Berkman at home plate after Berkman hit a three run home run in the eighth inning against the Florida Marlins at Busch Stadium in St. Louis on May 5, 2011. UPI/Bill Greenblatt

Lance Berkman took a Mike Dunn fastball deep to left field on the first pitch he saw for a three run homer breaking a 3-3 tie in the bottom of the 8th to give the Cardinals a 6-3 win over the Florida Marlins Thursday afternoon. It was Berkman’s 10th homer of the season.

Josh Johnson, Florida’s ace, came into the game with a 3-0 record and a 0.88 ERA, but he got straddled with the loss and his ERA inched up to 1.68. He gave up a RBI single to Matt Holliday that tied the game in the 8th inning. Holliday had two RBIs on the day.

Jason Motte got the win, but Tony LaRussa said after the game that starter Jake Westbrook pitched great keeping the Cardinals in the game with 6.1 solid innings and three runs on seven hits while striking out eight.

Albert Pujols went 3 for 3 as Berkman and Holliday combined for all six RBIs.