Governor Nixon has mobilized the Missouri National Guard to repond to the flooding in southern and southeast Missouri. Two hundred Citizen-Soldiers are going to Poplar Bluff to help residents there with flood relief.

Major Tami Spicer says the Guard is anticipating crossing water covered roads to get to homes affected by tributaries … mostly in vehicles that can handle high-water. She says the guard will also assist in sand-bagging, conduct door-to-door safety checks, and monitor levees. Spicer says many of the citizen soldiers going to help have served overseas, so it’s a well-seasoned group with valuable experience. 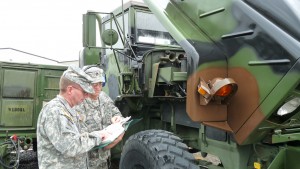 “Our troops are bringing valuable experience from previous state emergency missions and overseas deployments,” Danner said.  “We are a professional force and will provide our fellow Missourians with the same high-quality emergency response they’ve come to expect.”

Of the 11,500 members of the Missouri Guard, 500 are serving overseas now. She says they are almost at a low point for mobilization. “We’ve had two or three thousand deployed at a time.”

She adds that this is the 19th time Missouri Guard has responded to natural disasters within the state just in the past six years.

“Our troops are bringing valuable experience from previous state emergency missions and overseas deployments,” Maj. Gen. Steve Danner says.  “We are a professional force and will provide our fellow Missourians with the same high-quality emergency response they’ve come to expect.”

Gov. Nixon has ordered the Guard to immediately “move units into place where they can best help in protecting health and property.”

“The Citizen-Soldiers and Airmen of the Missouri National Guard have demonstrated their ability to help with natural disasters numerous times over the years, most recently in the work they did before, during, and after the blizzard and record snowstorm this winter.”

For continuing updates on the “Rising Tide” response, visit www.moguard.com and the following social media sites: