You are here: Home / Sports / Westbrook rocked in game one vs. Nats 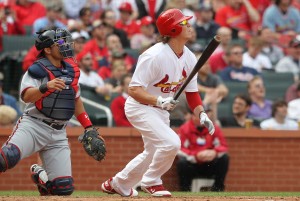 Cardinals starter Jake Westbrook gave up five hits and two walks and six runs in the third, and the Nationals held on for an 8-6 victory despite the Cardinals rallying to have the go-ahead run to the plate in the seventh inning, but the Cards couldn’t complete the comeback.

Cardinals batters went 3-for-13 with runners in scoring position and hit into four double plays on the afternoon. Albert Pujols and Colby Rasmus each hit solo home runs.