Cardinals first baseman Albert Pujols broke out of an early season slump by reaching base twice as well as driving in two runs as the Cardinals edged the Pittsburgh Pirates 3-2 Tuesday night at Busch Stadium.

Kyle McClellan, making his first major league start, gave up as many earned runs in the first inning as he did all of spring training. A two run homer by Lyle Overbay put the Pirates on top 2-0.  After a lead off double to start the game, McClellan struck out the next two batters and looked like he might get out of the inning unscathed. 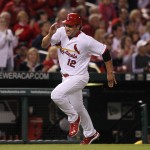 The Cardinals chipped away at Pirates starter James McDonald, who lasted just 4.2 innings thanks to four hits and four walks.  It started with a RBI single from Allen Craig that drove in Lance Berkman in the fourth. Pujols hit a sac fly in the fifth and in the seventh, came through again to put the Cards on top.

Ryan Theriot drew a one out walk, and a bloop single by Colby Rasmus advanced Theriot to second who scored on Pujols’ single into left field.

McClellan struck out seven as Pittsburgh fanned 11 times. He got a no-decision as Miguel Batista picked up the win with Trever Miller getting a hold and Ryan Franklin grabbing his first save of the season.