The Senate version of the proposed map of Congressional Districts in Missouri looks similar to the map released by a House committee last week including an awkward fifth district that links inner city Kansas City with rural Saline County, in central Missouri.  The distict is now represented by Congressman Emanuel Cleaver, the former mayor of Kansas City. 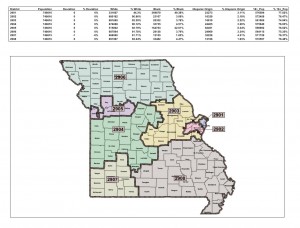 The senate map, like the house map, has one district stretching across north Missouri, border to border. Rupp says it’s the only way enough people could be put together into one district in the sparsely-settled parts of north Missouri.