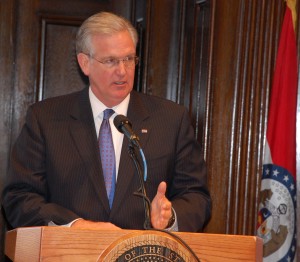 Governor Nixon has issued a challenge to the state Senate to return next week and approve legislation allowing long-time unemployed Missourians to continue receiving money as well as a bill to pull down federal education dollars.

Nixon called on the Senate to approve legislation drawing down $105 million in federal funds to extend unemployment checks for the next nine months.

“Now is the time to come together for the good of our state and for the good of our friends and neighbors in need,” Nixon stated in a news conference held in his Capitol office. “I call on the Senate to return next week and get this bill to my desk.”

Some senators have held up the funding, arguing that Jefferson City needs to send a message to Washington to rein in spending. They reason that rejecting the money would send a clear signal to Congress to get serious about reducing the federal deficit.

The House has approved legislation that would allow the state to access the federal funds for the long-time unemployed. The money would provide unemployment checks to approximately 10,000 Missourians for the next nine months. The Senate hasn’t taken action on the measure. Though the checks end Saturday, the governor said the state could provide make-up payments if the Senate acts on the measure.

The Senate hasn’t taken action on another issue relating to federal funding. A supplemental appropriation bill, HB 15, has been approved by the House and sent to the Senate. It would allow the state to receive $189 million in federal education money to be distributed to local public schools. The House has made that federal funding a part of the overall appropriation for the basic school funding formula for local districts. The $23 billion state budget approved by the House this week uses the federal funding to keep public school funding steady for the next fiscal year.

Nixon countered during the news conference that if Missouri doesn’t accept the federal funding, it won’t go to reduce the deficit, but instead will simply flow to other states. Nixon added that philosophical stances should give way to practical concerns.

“This is serious,” Nixon said. “We cannot put the education of Missouri’s children at risk.”

Nixon’s staff distributed information about how rejecting the federal education funding would affect every school district in the state. Clear here for a link to that information.