Congresswoman Vicky Hartzler (R-4th District) spoke to a group of concerned citizens at the Farm Bureau Headquarters in Jefferson City, telling them that Washington’s “reckless spending is hurting our economy, destroying jobs and saddling our children and grandchildren with mountains of debt.” 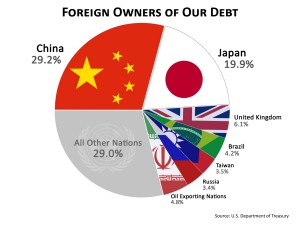 Hartzler showed a Budget Power Point (click to view) that explains how — according to the U.S. Treasury Department — the percentage of foreign holdings has risen from 5 percent in 1970 to 19 percent in 1990 to 47 percent in 2010. She says that threatens jobs, it threatens small business and it threatens our nation’s security.

“Those concerns were voiced by General Mike Mullen, Chairman of the Joint Chiefs of Staff, when he said, ‘I think the biggest threat we have to our national security is our debt.'”

China holds more than 29 percent of our debt, Hartzler says. “With teh interest we pay to China, [they] can buy three new Joint Strike Fighters every week — with $50 million per week left over. That’s a fact that should motivate all of us to get our fiscal house in order.”

She says that China is growing its military as fast as it can and she says “we don’t know why.” She notes that second in line with America’s debt holdings is Japan, “which are our friends.”

Hartzler also spoke out against the air raids on Libya’s aircraft shelters, saying it was a decision President Obama should have discussed with Congress. He spoke with other leaders, she says, other than U.S. leaders. She is pleased that NATO is now involved with the initiative against that country since it shouldn’t be “just the U.S. spending its resources and putting our men and women in uniform in harm’s way.”

Hartzler represents the areas in Missouri that hold our biggest military presence — Fort Leonard Wood and Whiteman Airforce Base. March 20, three stealth bombers were deployed from Whiteman to drop some 90,000 pounds of payload on Libyan aircraft shelters — about 45 bombs. The “batwing” fighter craft B-2s flew direct from Whiteman and back, a mission longer than 20 hours.