A good chunk Missouri has been hit with wet, heavy snow this morning … Interstate 70 and south almost to I-44 were snow covered or mostly covered in a snow area that stretches from 63, east to the St. Charles area. Boone County reports almost six inches, lighter amounts fell in St. Louis, Kansas City and surrounding areas. 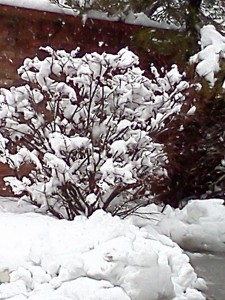 The National Weather Service in St. Louis says warming temperatures should turn it all to water by tonight and tomorrow.

Meteorologist Jayson Gosselin says last night it was difficult to predict whether Missouri would get rain, sleet or snow, but later on … they got their answer.

He says it’s expected to change over into rain later this afternoon and ground temperatures are hovering just above freezing, so the white stuff won’t stick around long. The most accumulation is around the Columbia-Jefferson City area…

School cancellations and covered roads and walkways have many people asking … can we be done now? Gosselin says he can’t say for sure. He points to a record snow fall in St. Louis more than a century ago. And don’t rule out more snow quite yet — Gosselin says a record 20 inches fell in the St. Louis area March 30 and 31 in 1890.