U.S. Marshal John Perry, 48, has died from wounds he suffered in Tuesday’s shoot-out. His killer, fugitive Carlos Boles, was killed in the exchange of gunfire; Perry was shot in the head during the stand-off. 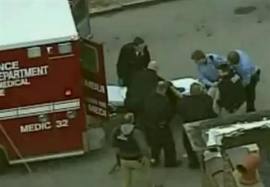 “There is no higher calling than taking an oath to serve and protect, and then wearing the badge of a law enforcement officer. Yesterday, Deputy U.S. Marshal John Perry paid the ultimate price for his commitment to making his neighbors safer and his community stronger. We in the law enforcement community have lost another brave brother and will stand together in support of Deputy Marshal John Perry’s family. I offer my condolences to John Perry’s family and thank them for his courageous service.

“I also extend my wishes for the full and speedy recoveries of Deputy U.S. Marshal Theodore Abegg and the St. Louis Metropolitan Police Department officer who were wounded in Tuesday’s attack. I am grateful for their service and sacrifice.”

U.S. Attorney General General Eric Holder said in a statement today that Perry’s death is “yet another solemn reminder of the dangers that United States Marshals confront on a daily basis. These brave men and women routinely put their lives on the line in their work to combat crime and gun violence, to apprehend dangerous criminals, and to help bring fugitives to justice. Yesterday’s actions by two Deputy U.S. Marshals and local police officers in St. Louis reflect the dedication and courage that defines America’s law enforcement community.”

Two federal marshals and a St. Louis police officer were shot and wounded this morning, as they attempted to make an arrest around 7 a.m. in St. Louis; the suspect has died of his wounds. The two marshals have been hospitalized; one is in critical condition, and the other in fair condition. Previously, it was reported that a marshal had died, and the U.S. Marshal Service has corrected that information.

The scene and the investigation have been turned over to the FBI, which is standard procedure in this type of situation. As officers were attempting to serve the arrest warrant on drug charges, the suspect barricaded himself in his home and the situation became a stand-off; SWAT team members entered the home with guns drawn and came out more relaxed. Details on what happened have not been released.