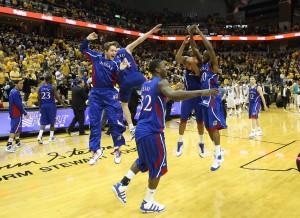 Kansas Jayhawks basketball players celebrate on the court after defeating the Missouri Tigers 70-66, at the Mizzou Arena in Columbia, Missouri on March 5, 2011. UPI/Bill Greenblatt

The Missouri Tigers shot just 29 percent for the game and hit just 3 of 23 on three pointers as they lost at home for the first time this season losing 70-66 to Kansas Saturday afternoon.

The Tigers were down 32-31 at the half thanks to hitting 14-16 at the free throw line. In the second half, MU got in early foul trouble and sent KU to the line 23 times.

A total of 51 fouls were called between the two teams. More to follow.

It was a game of runs throughout the day and the Tigers made one push late after falling behind 15 with 4:08 to play. Marcus Denmon who scored 19 points hit a three with 1:32 to play to make it 63-59, KU, but Tyrel Reed buried a three of his own with a
minute to play to put the Jayhawks up 66-59.

Denmon was just 4 of 12 from the field. Laurence Bowers had 22 to lead the Tigers. KU had a 49-29 advantage in rebounding.