Fast moving storms have brought hail and heavy rain…and high winds…to a good swath of Missouri overnight. The weather service has numerous reports of property damage this morning but no injuries or deaths. 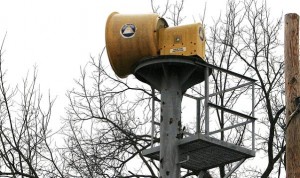 Weather service investigators are in the Cairo area, north of Moberly, Branson area and in Central Missouri today to see if tornadoes damaged a home, destroyed a garage and blew cars and trucks off the road. At this time, the National Weather Service is still determining whether two tornadoes touched down or if it was in fact just very strong winds.

Building damage from high winds also is reported in Barton, Morgan, Monroe, Shelby, Marion, Ralls, Pike, Osage, Gasconade, Franklin, in St. Charles County where structural damage is reported at a vineyard, St. Louis County, where a wall cloud with rotation was seen at Creve Coeur, and a funnel cloud was spotted near Concord Village, the City of St. Louis where a funnel cloud was spotted in the air.

About 30,000 people in the state were without power following the severe weather that moved through the state late last night and early this morning.

Five people in Missouri were killed in a system of storms that dropped tornadoes in Missouri — four of them died in mobile homes (two in Dent County, two in Phelps County). Another woman died from her injuries after being struck while in her vehicle in the Fenton area.

A statewide tornado drill is set for March 8.