You are here: Home / Sports / Home sweet home for Missouri 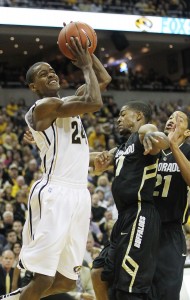 Missouri Tigers Kim English (L) goes for a layup past Colorado Buffalo's Andre Roberson and Cory Higgins (R) in the first half at the Mizzou Arena in Columbia, Missouri on February 5, 2011. English scored 21 as Missouri defeated Colorado 89-73. UPI/Bill Greenblatt

It was nice to see Kim English finally do something for a full game. He broke out of his slump, leading Mizzou with 21 points, as the 14th ranked Missouri Tigers pressured Colorado into a season high 23 turnovers in an 89-73 win at Mizzou Arena Saturday night.

English was not one of the starting five, but said it was nice to get back to their home court, where Mizzou has been hot all year, going 14-0 this season. “It’s kind of easy to have energy at home,” said English, who came off the bench for only the second time this season. “You know one big play will get the crowd involved.”

Marcus Denmon added 17 points and Ricardo Ratliffe had 14 points and nine rebounds for Missouri (18-5, 4-4 Big 12). Now, can the Tigers display this type of emotion and energy on the road? So far they haven’t. The Tigers are 0-4 on the road in conference play and head to Lawrence to face the #2 Jayhawks on Monday night.