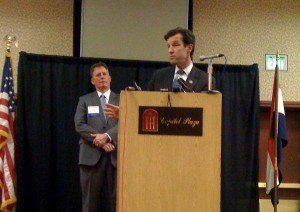 Missouri is losing one of its Congressional seats due to low census numbers, and many are speculating that St. Louis Congressman Russ Carnahan will be the odd man out. Carnahan was in Jefferson City Thursday, so the Missourinet took the opportunity to ask him about the situation.

After he gave his speech at the Statewide Transportation Conference, we asked Carnahan how the Missouri Congressional Delegation’s meeting with the state legislators who will draw the new districts went.

“Good. Met with a number of Republicans and Democrats here. I was in the legislature 10 years ago when we did this. You know, it’s a process, it’s an important one and looking forward to working with folks here to get it done right,” Carnahan said.

Another reporter then asked if Carnahan felt vulnerable

“No. I feel like there’s a process in place here and I’m happy to work with the leaders here in the legislature to get it done,” Carnahan said.

As the reporter asked that question, one of Carnahan’s aides told us they had to go; about three minutes after the interview had started. As he started walking away he was asked if he felt the redistricting process will be a partisan one.

“That’s not what our constitution says. You know, there’s a constitutional duty for legislators to work through the process. We’ve met as a delegation in Washington, and just as we did 10 years ago, I think we’ll find some common ground to work together to get it done,” Carnahan said.

Missouri’s members of Congress have been hesitant to respond to speculation about which district will be cut. The redistricting committee is still waiting on more detailed information from the U.S. Census, whose numbers determined the state would lose a seat.