Authorities are still trying to find an airman who was last seen at Whiteman Air Force Base about 11:00 Sunday night. Authorities believe 18-year-old Airman First Class Luis M. Vazquez’s disappearance is related to an incident in Blanco, Texas, where another airman stationed at Whiteman committed suicide.

In a press release, Johnson County Sheriff Charles Heiss says Vazquez is believed to have been last seen with 19-year-old Airman Kerby Barbe on Sunday night on Whiteman Air Force Base.

Barbe shot and killed himself after a standoff with police on Tuesday in Blanco, Texas. Heiss says Barbe traveled to Texas in Vazquez’s vehicle, a newer model bright blue Toyota Tacoma Truck with camouflage trim along the bottom.

They’re searching near the base for Vazquez.

“We’re working very closely with authorities at Whiteman Air Force Base in trying to locate this missing airman. There are some active searches going on in the area, and area where this missing airman may have been seen, may have been last seen. So we’re searching that area as a matter of standard procedure to see if we can locate anything or locate this airman. I can tell you that we are very concerned for his safety and well-being,” Heiss said.

Heiss says he believes the airmen only knew each other from their time at Whiteman. Vazquez is from Nebraska, but Heiss says the search for him is focused on the area near Whiteman Air Force Base since it is believed he was there Sunday night. Both the men failed to show up for work on Monday.

Heiss asks anyone with information to contact his office at (660) 747-6469. They are still looking for the truck as well, which bears a Nebraska license place, 65N-688. 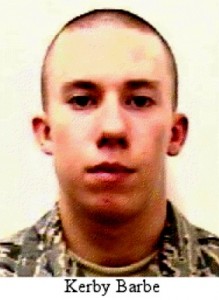